His first years in Canada, that he shared with the Congregation at the special service on March 27, 1999.

Today we celebrate the 50th anniversary of the Bethany Christian Reformed Church in Bloomfield.

As a member of the first Dutch immigrant family to arrive in the Picton, Bloomfield area, I was asked to say a few words about the early years. 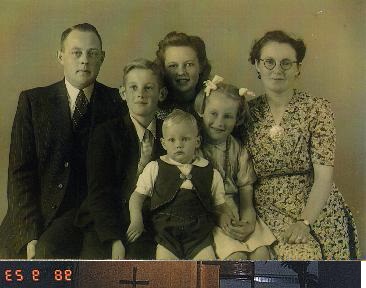 I arrived in Picton with my parents, two sisters and one brother in September 1947.  Our first Canadian Home was a small house on  highway  #33 across from what is now the Hydro office.

The farmer my Dad was to work for picked us up at the train station in Trenton. We arrived in our house that day at noon, it was Sunday.  The farmer had furnished the house with the bare necessities.  At two o’clock He [the farmer] came back to see us, and then he showed my Dad by pointing at his watch, that he was expected in the barn at 4 o’clock to milk the cows.

After being on the ocean for twelve days and one night on the train with little sleep, that was our great Canadian welcome.

On Monday morning it was time for school. I was 14 years old, and had started high school in Holland, but because of the language problem I had to go back to an elementary school.  The school   I went to was the one room school at Warings Corners, where later Hallowel House was built.  My first few months were very unhappy, I was home sick for Holland.  The teacher I had the first while paid little attention to me.  He gave me a book about "I am John and I am Mary".   I also did some math as long as it was in numbers.

After Christmas we got a new teacher, Mrs Otto.  Some of you may remember her.  Her husband owned the drugstore in Bloomfield for many years. Mrs Otto made sure I learned more than in the previous months.  She used to get me up in front of the class to practice my th’s.  What a joy that was.

All in all school in Canada was not my cup of tea, and in the spring of that year I was offered a job at the Co-Op for 25c an hour.  That was not a bad wage for a kid of 15, as my Dad was only getting $ 75.oo a month plus a free house, milk and wood.

I just want to go back to the previous fall, and tell you that I went to Sunday school at the Picton United Church every Sunday.  We were picked up by Mrs Howard Anderson.  Late in the fall one evening Rev. Garret Andre came to visit us.  At that time Classis Grand Rapids had instructed Home Missions to send Missionaries to Canada to work among the Dutch immigrants from Holland, because most of them were of the Reformed faith.

Rev Andre took my parents and my uncle and aunt the Jurian Rekker family, who lived west of Bloomfield, to Carrying Place, where they picked up more Dutch people, and they had a Church service at someone's house, and this happened different times during that first winter. I remember that my parents were always gone until wee hours of the morning, I stayed home to baby sit.

I will never forget the first Canadian Christmas.  In the middle of the morning one of the Gentile girls who lived almost across the road from us, came over and invited our whole family to spend the day with them.  They made us feel very welcome.  Being immigrants themselves from before the 2nd world war, they seemed to realize what it was like to us that first Christmas.

In the county Guide last December, a reporter asked a number of Picton people "what is your fondest Christmas memory”?  Vince Gentile's answer was "we used to share with neighbours nextdoor who did not have very much".  We were one of those neighbours.

In January 1948 Henry Wemekamp arrived in the Picton area.  We were happy to see him.   He spent a lot of time at our house -and he had a car.  On Feb 29th the first Dutch immigrant baby was born in our area.  It happened to be my brother Fred.
Since then more than 500 babies were born and baptized in our Church family.

That winter the Nies Postma family came here from the Trenton area .  In April of 1948 there was a big arrival from Holland. Prinzens, Veenstras, VanGrootheest and many more.   By this time we started having regular Church services in the Benson Hall, some with Rev Andre and some reading services.

In July 1948 Rev. and Mrs. Andre with their two sons Fred and Herman moved to Picton, and he became our Home Mission Pastor.  Also in that summer we started having services in the Quaker Church in Bloomfield.

By this time more families were arriving.   One family brought a cross cut saw from Holland, just in case they had to cut down trees to build a house.

All this time our services were in the Dutch language. While visiting Grand Rapids, Rev. and Mrs. Andre picked up a supply of Red Psalter Hymnals, and with Mrs. Andre at the old pump organ, we learned many of the English Hymns which we still enjoy.

Rev Andre was not only our minister, but he was also our taxi, car salesman, interpreter and mediator between employer and employee.  On Sundays the Andre's would arrive at the Church early.  The paster and his wife would wait at the Church, while son Fred was sent out to pick up car loads of people, and I do mean loads. Sometimes he had as many as 13 people in their Kaizer Fraizer.  Fred also had a heavy foot.  One lady claimed that he sometimes skipped pieces of the road, it had a lot of dips in it.

Transportation was a big problem those early days, because only a few families owned a car.  Arrangements were made for those with cars to pick up some of the others. A transportation fund was set up.   Families had to pay $1.00 per Sunday so the drivers could be reimbursed.   While my Dad would be picking up other people, we had to start walking to Church.  We were living at the Warings Corners.  One Sunday the family Dad had picked up for Church from Big Island, came to our house for coffee.  The lady told my Mother that since they were getting to Church just fine, they were not buying a car but were saving for a farm first.   My Mother was usually quite good natured. but that statement did not go over well.   My dad did not make many more trips to Big Island, and that family soon bought a car.  I remember when a family bought a "new" car we, especially the young people, would look it over after Church to see if it met our approval.

We were moving fast.  Many more families had arrived, and catechism classes were also started, and so was a young people's society.  Sunday school classes were also started after the morning service.  More and more people were getting cars.  Our only activity  [I mean the young people] outside the Church was Saturday evening
in downtown Picton.  Television was just coming in, and sometimes as many as 20 or 25 of us, would stand in front of Nourse Radio's window to watch TV, with no sound.

The first immigrant wedding was when Henry Hoekstra and Ruth DeVries were married in April 1950, The wedding was on Sunday, and on Monday evening everyone was invited to the DeVries home in Cressy for a celebration.   Henry had just bought a small Renault, and at the end of the evening the car was sitting on the veranda.   It was a good thing Henry and Ruth did not have far to go that night. I believe Gus Boschma and Shirley Bakker were married that same year in July.
In February 1950 a call was extended to Rev Andre to become our fulltime Pastor, but he declined, because he felt he was needed by the Home Missions.  A farewell evening was held for the Andre's, and they were presented with two airplane tickets for a trip to Holland.  Although they both had Dutch roots, they had never been there. During that year we also began one English service per month.

In October 1951  Rev. Grasman became the Pastor of our Church.  He was a former school teacher, and that also showed on the pulpit.   Sometimes I remember that on Sunday mornings our Church could be quite noisy, and that would bother him so much, that on different occasions he would stop preaching, and wait for quietness to return before he could finish his sermon.  Also if someone fell asleep, he would stop, and believe you me nothing wakes you up any faster in Church than complete quietness and all eyes staring at you.   Rev.  Grasman did much for our congregation and although he was very different from Rev Andre, he took his calling very seriously, He stayed with us until 1954.

1952 seemed to be the year of coming and going.   We started out with 100 families and ended up with 70.  The younger people especially moved to the larger centers like Oshawa, Toronto and Hamilton for the higher paying jobs.

In 1953 our Church was incorporated as a Canadian Church and the name “Bethany” was chosen.

In September 1954 Rev. Betten accepted a call from our Church.   He was a kind and peace-loving person, and although different from his predecessors, he also did much for the wellbeing of our Church.

In 1957 tradition was broken in our Church and women were finally given the right to vote.

During the fifties, discussions were started regarding the building of a new more up to date Church.  The big question was:  where?. it was finally decided to tear down the old Church and build a new one on the same location.

Rev Betten left during that period in 1960, and Rev John Zantingh arrived here in September 1961.
While we were without a Church building the Bloomfield United Church let us use their Church, Sunday afternoons and for the evening service as well.

I was asked to give a short report on the early years.   I won't go into details on the years to follow.  I just want to mention yet that in September 1977 we had our last Dutch service.  It was a reading service and was read by Henry Nyman.   We kept it up for a long time, but it was time to go on.

We had many ministers here during the last 30 years and we have become a really Canadian Church, with many members who did not have Dutch roots.  They are teaching Sunday school, serving on council, and even directing the choir.  They have been a real blessing to us.

In summary: Looking back, at the courage of our parents to take such a leap in faith, 10 years of depression and five years of war, must have strengthened their faith in God and in a dream they had for so many years.  They wanted a better life for themselves and their children.