Research from minutes and archives

When the Quaker church was purchased, it had only the bare necessities.  A platform with a small lectern and pews around it.  The church was  built by the Society of Friends in 1817, known as Quakers, a name given by their opponents. The name "friends" was taken from the gospel of John, "I have called you friends". 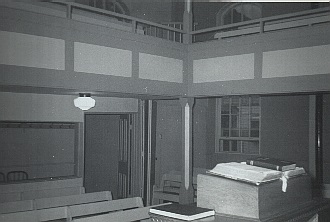 It was a brick building.  Coming into the building one would enter in the hall. On either end was a door to the stairs, and on both ends was a door to the sanctuary. The platform was on the opposing wall. The way the church was laid out everybody was sitting in front. The wall between the hall and the sanctuary could be opened during the summer when the weather was warm.  It also had a gallery that had been closed of by the Quakers, who had used the church the last time in 1942.

The Quakers did not use any music in their meetings.  When our people began to use the church, a small house organ was obtained.  While looking for an organ or piano, the family E Foster from Northport donated a grand piano to the new group.

The upstairs pews were like steps built with the church, while the downstairs were benches. The two woodstoves would keep the church warm, if it was not too cold.

Behind the church was the woodhouse and the outhouses.  These were in state of repair when the building was first being used again.  Mr. F. Smitstra did the repair work and put insulbrick siding on the outer walls.

In 1950 an addition was built on the back. This was done by free labour. Mr. John VanVliet was the leading carpenter on this project.

There was no water on the property.  It was not a problem in the early days.  Not many had water in the house.  Often a pump outside and an outhouse with multiple seating capacity.

From the church of Creston U S A. the new church received a communion set, a pulpit with two stands and two text boards.  A bible was donated from a member of the Creston congregation, who wanted to remain anonymous.  It was a Dutch Bible
[ Staten Bibel] presented to Bloomfield by Rev. Andre.

In 1952 another organ was purchased.  The committee appointed was Bernard Prinzen, Bill VanSoelen and Bill Prinzen.  It was bought in Toronto and it had two play tables. It was placed on the east side of the platform where it was for some time.   Later when the church grew too big for the downstairs, the ceiling put in by the Quakers was taken out and the organ was also put upstairs.

In 1951 the choir was started and the little house organ [ harmonium ] was sold. The grand piano was taken to the parsonage in Picton, because it took too much room in the little meeting room.  An upright piano was bought for the choir to practice with and the young people to use at their meetings.  The little room was divided in two rooms, so a nursery could be used during the church service.

Our ministers would often travel back to the USA.  The people there would often give them stuff to take back to Canada.  Maybe the new churches could use some of the things they did not need any more.  One time Rev. Grasman came back with another pulpit a little bigger then the other one, and two chairs to put on the platform.  The smaller pulpit was used in the meeting rooms.
For collection plates bread baskets were used.[ ironic that in later years money was referred to as "bread", like in the hippy time ].

Our second organ was purchased in 1958, an organ that could be used in the new church. This organ was a"Wurlitzer".  In later years it developed some trouble with the foot pedals and the little wires would break. It was used until 1978.

When the old church building was removed to make room for the new church, some of the old furniture was useable in the new church. The pulpit was used downstairs in the hall. 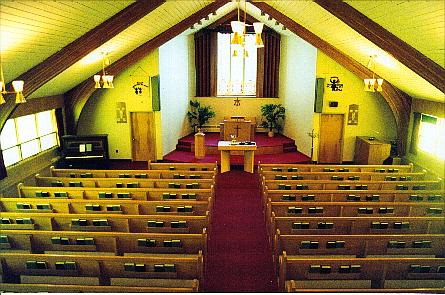 In the contract for the new church building, the furniture was included.  The pews and the two tables, the communion table and the offering table, and the pulpit were built by Mr. Black from Hansler, Ontario, who donated the two text boards to the congregation. The baptism fount was donated by the Whattam Funeral Home. A new pulpit Bible was donated by the Sunday school children who had saved up for this. 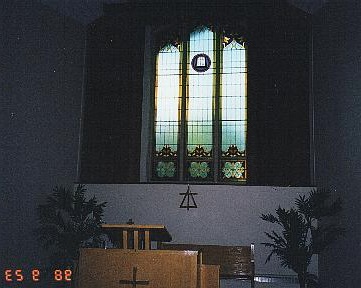 The two groups of ladies aid called  “Ruth” and “Martha”, who were always known as the Dutch and the English ladies aid, had raised enough to donate the stained glass window.

Many more donations were received from different people and groups.  The church building was known for its bright colours. The building is of cement blocks with brick facing, the roof of double tong and grove, four by four is covered with asphalt shingles. The large window at the front is faced with stone. The roof is supported by arched laminated rafters. The ceiling was painted white, the side walls are in turquoise blue while both ends were wood rose shade.  At that time modern cluster lights did add to the brightness of the interior.  The ante-room leading to the basement was done in orange, with flower boxes on the sides. The platform in the front of the sanctuary was covered with wine red carpet. The collection plates were made of wood. The heating was hot water heated by an oil furnace. The consistory room was next to the front platform in the front corner of the church. The elders and deaconate pews were in front, three short pews, which were later taken out and the piano put in its place.  The organ was on the other side.

The light on the organ was purchased in 1969, with money collected in memory of Mr. John Rensink, most of this money was collected at the local high school. A new communion set was purchased, it was lighter than the old silver set, easier to pass through the pews.  Also new glasses would be available for this set. A canter and two beakers were donated by the ladies aid.   In 1977 a piano was donated in memory of Mrs. Nelly Westerhof.

In 1979 a new organ was purchased from the Classic organ company.  This organ was more up to date.  It has an output five times greater than its predecessor, the Wurlitser.  The bells were donated by John Coenraads, who was involved with the Classic Organ Company.  The president of this company, Henry Wemekamp, was also a native from the Bloomfield church.

The young people society donated the carpets for the aisles.  The money was raised by catching chickens at local chicken farms.

In 1983 from money left to the church by the late Mrs. L Ebbers, a new sign was built in memory of Mrs. Ebbers.

In 1982 in a wind storm the steeple blew off the church.  It was replaced in the spring of 1984.  The new 28 foot high aluminum steeple was designed and built by George Henley.

A lectern was designed and built by Adrian DeKorte, and donated to the church to be used in the church worship.

In 1991 a new addition was built to the church for extra meeting rooms, and wheel chair accessibility to the church, by the contractor Elmer Terpstra.

A piano for this new part was donated in memory of Mrs. Simone Ypma. The parking area was paved when the new part was completed.

The building and the furniture has been the pride and respect of the members, who have dedicated this to the honour and glory of God.